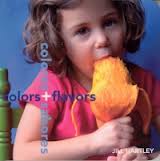 Like the previous two books I\’ve found by this author/photographer, colors + flavors is a simple collection of brightly colored pictures around a common theme. In this case, it happens to be fruit. Only the cover image shows a kid actually eating the fruit- all the interior pages just show the fruit itself, each one usually pictured as a whole next to a sliced-open portion to show the insides. All the pictures have bold-colored backgrounds or plates that compliment the colors of the foods nicely.

A lot of the fruits were unfamiliar to me. The ones in the book I know well were bananas and plantains, strawberries, mango, avocado, watermelon, peach, nectarine, grape, plum, orange, lime and pineapple. I have never eaten but did recognize the figs, pomegranate and star fruit. There were seven other fruits I could not identify at all. I think some were cactus fruit and am guessing one was a papaya but the others have no idea. Which made it fun to look at the pictures the fourteenth (or whatever) time in a row my kid pulled this book off the shelf, as I kept musing on the identity of the unfamiliar ones.

Arrows Into the Sun

I thought of this book in context of the other ones I\’ve been reading recently. It\’s been quite a few years since I read it, but some things do come back to me. It\’s a story set in frontier times, about a boy of mixed race- part native american, part white- who befriends and eventually falls in love with a pioneer girl. She happens to be Mormon. I remember finding the story fascinating but also a bit disturbing, because some of the depictions of Mormon beliefs and how they acted didn\’t quite match up with what I know of LDS culture (from having grown up in that church). In particular, I was bothered by the hints of violence- I recall that once the boy saw a portrait of Joseph Smith in someone\’s house and the painting showed him holding a sword. It unsettled the character, and this reader as well.

The novel itself was a good read, however, with interesting characters that struggled with their differences, with their growing minds expanding beyond the constricts of their respective cultures, with the disapproval their friendship brought upon them from each of their communities. I can\’t remember the ending well; I think they ran away together but I\’m not sure. Has anyone else read this? What do you recall?

I wish I could find the book again but it\’s out of print.

After finishing The Loon Feather, I was interested in other books about similar time period or subject, so I pulled this one off my shelf. It\’s also about a native american woman who traverses several cultures. Picture Maker is born into the Ganeoganogo tribe (which others derisively call Mohwak) but as a young girl is stolen away by an attacking war party of Algonquins. She spends quite a few years among them as a slave before finally escaping and making her way north where she lives among the Naskapi tribe and even later the Inuit people. Her journeys don\’t end there, as she never stays long among one people but eventually finds herself in Greenland among the Norsemen who are struggling to survive there.

While the writing, character development and overall depth does not really compare to Loon Feather, this book was just as fascinating in its depiction of five very different ways of life. It was pretty incredible to me that one woman could make her way through so many very different cultures, not only learning the rudiments of the various languages, but also trying to find acceptance in each new place. She not only melded into the different communities but also different types of status. She lived at various times as the beloved daughter of a high-ranking war chief, as an abject, abused slave, as a stranger living rather like a second wife, as a surrogate mother to an orphaned child, as mother to her own children, as an outcast seeking refuge, and finally as a cherished wife herself. So many roles for one person, and it startled me at times when references to her age was made- only fourteen at this point, sixteen at another, thinking of herself as an older woman at merely twenty. Yes, people had shorter lifespans back then, but for one young girl to go through so much!

Picture Maker spent most of her life merely trying to survive, but she never forgot the teachings of her homeland, her pride in her own people, and proved herself capable of standing up for herself when provoked. I found her quite admirable, even if I wished her character were written with a little more depth. I also wished that the unique skill she had of creating art had been a larger part of the story. At certain times it was a remarkable ability that the people she lived among used for their own ends, at other times it wasn\’t a part of her life and seemed to have been forgotten.

The ending made me curious to move on to its sequel, Dream Weaver. I\’m also interested now in reading the book that inspired the author to write; The Greenlanders by Jane Smiley (although that one sounds like it could be very tedious).

It\’s an easy pick when only one person enters a giveaway. Anna is the winner of my polar bear bookmarks! Happy reading, Anna. I\’ll get them to you this week.

This lovely board book features animals that live in arctic regions. It has polar bears, penguins, seals, arctic fox, reindeer, walrus, arctic hare and snowy owl. Each spread has one painting featuring a single animal, and a narrow picture on the opposite margin showing the animal with others of its kind doing something typical. The penguins huddle together, the reindeer scatter to the horizon grazing, the seals turn in the water under thick ice. In addition the front and back endpages each have a double spread showing all the animals together in their respective habitats; the front spread has arctic animals and the back spread shows the ones in Antarctica (seals and penguins only). The pictures are richly painted and I love them all (except the arctic fox looks a little funny. His nose is too big). And of course my toddler\’s favorite animal is the walrus, whether it\’s the single walrus shown looming on a rock in front of the cold ocean, or the group of them all piled together resting.

I picked up this book once just browsing at the library (yes, I browse J Fiction sometimes) and found it quite a puzzle. It starts off with a likely-enough heroine, Claidi, describing her life in a journal. She serves a petty, cruel princess in a palace surrounded by a jungle maze and then a wasteland. The inhabitants are all fearful of the world outside and Claidi pretty much despises them all. When a handsome man crashes his hot-air balloon into the tower and is imprisoned, Claidi is instantly smitten with him, helps him escape and runs off with him into the wide world. There follows a series of adventures as she travels with him through several different towns. Each seems to have its own peculiar customs, sealed off from the world around. In the first, the people talk to and live communally with sheep. In the next, the people worship birds and try to offer Claidi as a sacrifice. They run into a troop of bandits, whose leader falls in love with Claidi but she follows the balloon-man onward due to an oddly blind sense of loyalty, even though he doesn\’t really treat her very well. Later they end up at a city where the ruling faction uses nonsensical games of chance to make the laws, and here Claidi finally does something worthwhile and tries to destroy their lawmaking- methods. She sees how it hurts the people.

But for most of the book I found her hard to admire. Claidi is so utterly ignorant, having been shut up in the palace all of her life, that she can\’t make sense of what she sees and frequently misjudges people. Usually I find that when an ignorant protagonist is describing new things, there\’s enough description that the reader can understand clearly what it is, even if the protagonist herself doesn\’t. But in this case I was often confused. Claidi makes a lot of awful decisions, and it turns out that people she trusts or even falls in love with prove themselves to be unpleasant and deceitful, while the ones she is wary of are the opposite- like the so-called bandits. Turns out they were really travelling traders.

Overall it was kind of a difficult book to read. The characters are written unevenly, and the voice of Claidi in her apparent journal entries was uneven as well. She uses lots of modern slang and expressions which feel out of place in the setting of the story. The adventures were by turns confusing or just boring. The heroine\’s actions and choices were often frustrating to this reader. Despite all that, I found the curious customs of the various towns so unique, imaginative and intriguing (even though they were often poorly described) that I kept reading just to see what new thing the author would come up with next.

Have any of you read this book? what did you think of it? 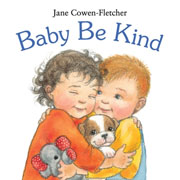 This is one of my favorite board books we have in the house. It has beautiful, soft illustrations showing little children doing various activities together, always accompanied by a puppy. The gentle words tell of ways even young children can be kind and compassionate to others, and the pictures show a simple storyline of the kids playing together, with little events that call for offering help, sharing, taking turns, forgiveness, handling anger and so forth. It\’s absolutely adorable and has a wonderful message as well, including not only other people in acts of kindness but also our animal friends. I always enjoy reading this book to my little one. The words have a nice, gentle rhythm and the pictures are a joy to look at.

Someone gave me this book when I was young. It\’s the story of a girl growing up in the 50\’s. She struggles with a reading disability and slong with her mother befriends an impoverished family in her neighborhood. Not much more than that stands out for me, after all these years. I recall an incident with the shoes- she had special shoes just for sundays that she was supposed to keep clean, or something. I also recall the girl having a conversation with a sympathetic uncle who discovered why she was struggling with reading (I think she\’d been hiding the issue) and helped her with it. Has anyone else read this book?
Rating: 3/5 …….. 167 pages, 1987