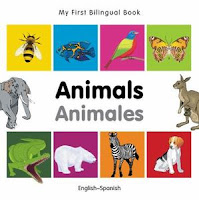 This book is full of illustrations of animals with their names in both english and spanish. Each spread has a few animals in groups more or less according to their habitat; pets are grouped together, as are arctic animals, jungle animals, a fish with a crab, livestock animals, etc. The one odd grouping is of a zebra and giraffe with a kangaroo on the same page. A minor quibble, but it stood out to me particularly because the bottom edge of each spread has a graphic illustration showing the habitat: water, lawn, fenced pasture, etc. It\’s a nice little touch. But kangaroos don\’t live in the same place as giraffes. Neither do lions and tigers for that matter (except for the introduced ones!) but that doesn\’t bother me as much. Although they really should have put the lion on the page with the giraffe…

Anways. The book also is a curious mix of both photographs and illustrations. All the insects are illustrations, for example, as are the habitats. It works, though.

A bigger issue with this one is simply that my kid doesn\’t seem to like it! Maybe I need to talk up its charms  and say more about each picture (\”look at the kitty! what is that kitty doing? does he want his tummy petted?  meow!\”) but for whatever reason after just a few pages of naming animals she\’s ready to move on to another book.