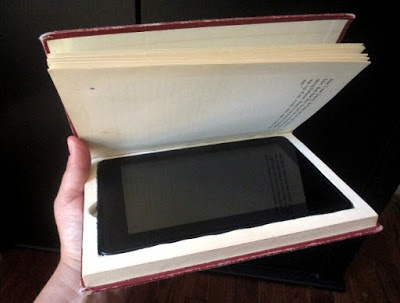 My kindle e-reader is finally dying. A few days ago it started sticking- I couldn\’t swipe to go to the next page, or sometimes, even swipe to get into the main screen. Then it started randomly telling me that my book files are corrupt or protected and I had to re-download them from Amzn (not where I originally got them from, btw). Then it began telling me the battery was nearly dead and refusing to turn on, when I\’d just completely charged it less than twenty minutes prior. Sometimes it won\’t boot at all. I\’ve tried shutting down and letting it sit for a while, doing a hard reset, or having it plugged in while I read. Day before yesterday after twice rebooting it responded normally again, so I finished reading The Ultimate in one sitting while the pages would scroll.

Now nothing I do makes it work. It\’s not a big deal- I\’ve backed up all my book files and docs onto my desktop harddrive, can transfer them to a new device at some point. And I have plenty of physical paper-in-hand books to read. But I was nearly at the end of this long middle-grade series, which just got good again and only four books to go. Now I don\’t know when I can finish. I\’m far beyond what the library has available, and I really didn\’t want to buy hardcopies of just these four, when I already have them in e-book format.

The point where technology fails me.

The Dragon of Lonely Island

Three children have to spend the summer at their great-aunt\’s house on an island. The aunt is not there, the parents and staff are usually busy, so the children explore. They find a hidden cave on a hill- and inside is a three-headed dragon. Each time the children visit, one of the dragon heads is awake, and tells them a story.

So it\’s really four stories in one. The children, their explorations and interactions and each of the dragon\’s stories, which are nicely interwoven. The children have a relatively quiet vacation- they explore the old grand house, go swimming and have picnics, bake cookies and play board games etc. but really they are always waiting for the day when they can visit the dragon again. Each has a difficulty or personality trait that the dragon addresses in its stories, giving them life lessons as it were. The oldest feels put-upon by having to be in charge, the middle child is something of a hoarder and doesn\’t like to share, the youngest lacks self-confidence and is easily frightened.
Dragon stories: first of a young girl in China during a time when girls were not valued. She finds the dragon injured in the forest, but nobody believes her when she tries to get help. Second story is about an orphan boy who goes to sea as cabin boy. Once he gets to the ship he realizes it isn\’t at all how the recruiting sailor portrayed things, but it\’s too late to turn back. He is mistreated on board and soon finds out the crew are actually pirates. He warns a ship they\’re about to attack and for that, gets dumped on an island, wondering how he\’s going to escape danger and get back home. Then he finds a cave full of treasure . . . Third story is about two children and their father, who are in a small airplane (back when planes were a very new thing) travelling across the world. They crash on an island, the father is injured and the children have to figure out how to survive. They find the dragon living in the forest, and ask it for help but it refuses annoyed being disturbed.
Of course each story is teaching the children something: how to be brave and face down the status quo, the value of sharing, resourcefulness and attempting things even if you don\’t know how it might turn out. For how short the book is, I really liked how well the characters and the stories they heard were depicted. And yes, the dragon talking to the children is the same dragon featured in each story. There\’s no high-stakes exciting adventures, especially with the three main children; this book has a very different appeal. The dragon itself is polite and mild-mannered, although it does at times get annoyed with the children. Sometimes its abashed reply to some lack of manners or compassion being pointed out was a bit- odd, for a dragon, but I think it\’s just driving the point home: this isn\’t a wild, angry, fierce beast. And the dragon likes to point out how wrong all the stereotypes about dragons eating princesses are!
Rating: 4/5                    160 pages, 1998
More opinions:
Semicolon
Earnestly Eccentric