The Zoo That Never Was 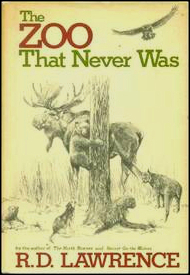 The author lived with his wife on 350 acres of forest in Ontario, Canada. He studied the local wildlife and was willing to take in animals that needed care (there was no wildlife rehabilitation center around in those days) so before long people in the area knew to bring him any injured or orphaned creatures they found. The largest character throughout the book is a black bear named Snuffles, that they took in as an orphan when it was the size of a cat, which eventually grew to be several hundred pounds standing taller than seven feet when upright! Snuffles makes repeat appearances through the narrative, gentle and mild-tempered unless denied food he wanted- then he’d fly into a rage and become destructive. The couple had to bar him from the house as he got larger, coax him to den up by himself for winter sleep, and were glad when he eventually made his own way in the wild. The bear was close companions with their malamute dog when it was a puppy- but as the two got older their wrestling bouts turned into serious confrontations and eventually the dog saw the bear as a rival and enemy. Which caused them a lot of trouble until the bear finally went off into the woods.

Among the many other animals they tended to and raised were a skunk, woodchuck, raccoons, porcupine, several squirrels, a lynx, moose, pair of river otters and one small but very lively weasel. They nursed back to health injured geese, ducks, rabbits, owls and a hawk.  The wildlife on their land came to recognize the couple would not harm them, and they had flocks of chickadees and blue jays demanding food on a regular basis, a chipmunk that would feed from their hands, flying squirrels and deer that would come to the yard also for food. Such a wide range of animals, all treated with compassion and respect- but also a heavy dose of caution especially the bear and lynx. The stories about their interactions are amusing and full of interesting details, and there’s close observations on all of them. In many cases the author was particularly interested in answering questions he had about the animals’ habits. One that struck me was his idea that raccoons don’t really “wash” their food- he suggests that the behavior is caused by the stress and boredom of being shut up in captivity (hence often seen by people) and that raccoons in the wild never repetitively handle their food in water. I’d be interested to know if anyone else has made this conclusion.  The tone of this book is very much like Heart and Blood: Living with Deer in America. Both authors had a very similar companionship with their dogs, stalking the wildlife together to approach animals for close observations. However they had directly opposite opinions on deer hunting.
Rating: 4/5
308 pages, 1981