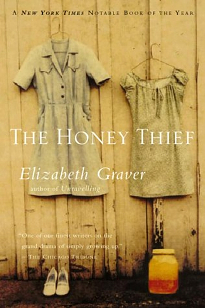 This book took me completely by surprise. In how close to home it was. I assumed from the jacket blurbs it was going to be about a troubled kid and a beekeeper- had no idea there was an element of mental illness in there, too. Warning for possible SPOILERS below.

At first this is a story about a mother moving with her pre-teen daughter from New York City to the countryside where she hopes for a fresh start. The daughter, Eva, has been caught shoplifting a number of times, she’s definitely got an attitude and maybe something else is going on. Her mother Miriam has to work long hours to support them, so Eva is left to her own devices- there’s a babysitter but she goes out bike riding and exploring alone. Finds a small farm nearby where a man puts out honey jars by the road for sale, on the honor system. You can guess what happens. Then Eva sneaks into the field where the hives are kept, and meets the beekeeper. She finds his work fascinating, starts pestering him with questions, hanging around, wanting to know more. He shows her things when he opens a hive, in spite of feeling uneasy about it. Meanwhile there’s chapters showing the mother’s point of view, and they weave into the past, telling what happened when Miriam first met Eva’s father. At first I thought this part so dull in comparison- personally I much preferred reading about how the bees were tended, and I related a lot more to the reclusive beekeeper, his reasons for settling on his grandmother’s farm leaving behind a lucrative desk job. . . but I soon found how relevant the backstory of Eva’s parents was.

SKIP this paragraph to avoid SPOILERS: her father had a mental illness, which he failed to disclose to Miriam when they first met, fell in love quickly and had a baby without much planning. He hadn’t had a bad episode in a long time and wanting to be better, thought he’d put it all behind him, until things slowly started unraveling. When Miriam finally realized something was seriously wrong, they were at a crisis point. This all felt way too familiar to me, as a reader- someone in my family has bipolar disorder, so I knew exactly what they were talking about it and a lot of it rang true to me. How the symptoms sneak up on you, subtly getting worse, but you don’t want it to be the mental illness so you don’t see it for what it is at first.. And after you’re always questioning: is my teen just being a teenager? is this normal mood swings? or is it a manic episode.

So I found the book really compelling, even though some of it was uneven, sometimes the dialog a bit awkward, the accident at the end a bit predictable, but not as shocking to me as in say, The Fire Pony. However the ending dropped off abruptly. I expected a bit more resolution- I was glad that Miriam finally told Eva more about her father, but she didn’t really explain the illness, and there was no hint of them finding out the answer to the big question: does Eva have it too. I suppose that’s realistic after all- you wouldn’t immediately tell an eleven-year-old who’s ready to find reasons to distrust you already, that you suspect she could have a serious mental health issue- but still I wanted to know more.

I liked this well enough I’ll look out for more by the same author.