Translated from the Greek by Stephanos Zotos 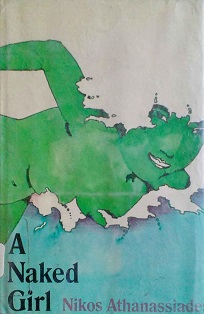 What a strange, curious, sensual book. I’ve had it on my shelf a long time. Tried reading it years ago and stopped because it made me uncomfortable, but kept it around for some reason. This time I found it- interesting, let’s say. I won’t hesitate to give SPOILERS because well, I doubt many of you will find this book (copies out there are few) and maybe you won’t want to read it after what I say here. Strong points? it has very vivid imagery about the sea, the weather, the gulls and fishes, shrimps and little crabs. It has some very interesting characters but also disturbing stuff and warning: bestiality (not explicit but very strongly hinted at) that is kinda glorified.

It’s about a young man in Greece who has just been scorned by the girl he loves (there’s a chapter that feels like it’s out of Jane Austen, with them at a social function talking a whole lot of circles around each other) and doesn’t want to face his parents’ insistence that he choose and work for a career. He goes to a remote spot to live in a hut on the beach and experience solitude. But doesn’t get that. Nearby lives an fisherman with his kids- a young woman named Angela and several much younger children. There’s also a friendly drunk with a leaky boat who tells crazy tales. The drunk insists that the fisherman’s daughter is a mermaid, and all the people in the nearby village call her “the wild one”.

Our protagonist Dimitri humors the drunk, goes out on the boat hunting octopus with the fisherman, and feels strangely drawn to the wild girl, Angela. In fact he goes on and on about her body, obviously lusting for her. It’s kind of irritating to this modern reader how much Angela is objectified. Dimitri is constantly going on about how beautiful her body is, obviously lusting for her. Her father the fisherman though, talks about how women are only good for keeping house, must be beaten into obedience by their husbands, and constantly mentions that he has to marry her off for her own good. No wonder Angela is constantly full of anger- in the story it’s anger for how the ocean is treated (although she herself displays viciousness, once biting the eye out of a living octopus). She spends hours in the ocean, swimming far out beyond areas people consider safe. She often says strange things, evades questions, and insists she knows all about the sea, and thinks that shooting stars fall into the sea to become starfish. There’s two other strange things in this story: petrified trees and dolphins. Up a steep hillside from the village is a standing petrified forest, and deep in the ocean is a huge sunken petrified tree. The villagers say it’s haunted and avoid the spot, the wild girl says it hosts a spirit and she’s not afraid of it . . .

Eventually Dimitri realizes there’s a large dolphin hanging around. The fishermen hate dolphins for chasing fish away or stealing their catch, in fact there’s a bounty on them. The girl Angela loves to swim with this one particular dolphin, and when Dimitri witnesses her doing so, he perceives their behavior as amorous and is wildly jealous. He determines to hunt down and kill the dolphin, though denying his plans to Angela when she gets suspicious of his intentions and demands him not to do it. In the end, there is a chaotic bloody struggle out at open sea in a small boat, the dolphin is killed, and Angela in distress and anger swims out into the ocean, never seen again. Although years later Dimitri sees a wild dolphin swimming alongside a boat, which has a scar just like one Angela had on her body, and gives him a hateful look. He feels sure that she turned into a dolphin and is living in the sea.

Of all things, this book reminded me of Castaway, because of how often Dimitri or Angela casually strolled around naked. Sometimes they attempted modesty, and other times they didn’t care. There’s a interesting interaction between Angela and the high-society girl Dimitri had admired, when she comes looking for him. There’s a few other minor characters, but most of the narrative is about Dimitri going around in the boat, finding the girl swimming in the ocean, and planning to hunt the dolphin. It’s very passionate and rather surreal too. I rolled my eyes plenty of times.