Encounters in the Animal Kingdom 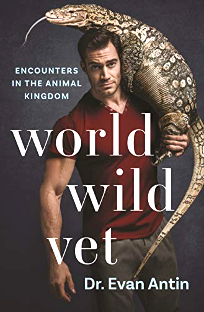 I never heard of this veterinarian before- apparently he’s got a television show and a huge following on social media. The book is about his travels all over the world, first just to see wildlife and film himself talking about it- giving little information snippets while he’s holding a creature- and later on, to offer his services as a vet in places that needed one. Sometimes he was a tourist, in other cases able to go places by volunteering- whether it was to clean out cages, do surgery on a primate’s abscessed tooth, or assist in catching wild giraffes for transport. The various locales include Australia, Tanzania, Ecuador, Costa Rica, Panama, Indonesia, Cambodia, Thailand, South Africa, Fiji, Tahiti, the Galapagos, Bahamas, Philipines, Uganda, Rwanda and Democratic Republic of Congo. He tells about getting up close to rhinos, elephants, minotor lizards, sharks, mountain gorillas, chimpanzees, tamanduas, river otters, sea lions, poison dart frogs, giant tortoises, scorpions, whale sharks, komodo dragons, many species of monkeys and most of all, snakes. This guy loves snakes. So many kinds of snakes I never heard of are described in enthusiastic detail. He always wanted to hold one- and obviously had the experience to do so, though I momentarily held my breath when I read about the fer-de-lance. I vividly recall how incredibly dangerous that one is from reading an incident in Jaguar! I really admire the work this man does, and his excitement at seeing wild animals in their natural habitat is unmistakable. As is his respect for the individual animals, and his desire to help them. He does talk a lot about conservation and why wildlife needs protection. However I was a little put off by the casual tone -the narrative is peppered with words like bro and gnarly. It covers a lot of ground in relatively few pages, letting you know how difficult and tedious it was to reach far-flung locales to see the animals, without much actual descriptive detail on that. It’s the kind of book that will appeal to a wider audience. Rather like Last Chance To See in my mind. Also the author doesn’t fail to mention how fit he is, he’s certainly very self-confident. I kept wondering if I would appreciate his videos or not, but I haven’t felt like watching any yet to find out.