Wasn’t sure what to call this one, as the puzzle box has no title. Nor a company or brand name, much less an artist. It just says “made in China” somewhere, that’s it. And a grid of red letters in one corner, 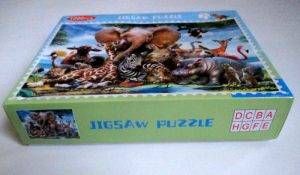 which I realized shows you where these cheat guides align on the back: 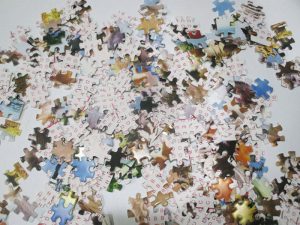 It made sifting through the box to pick out pieces by similar colors etc. pointless, as the red letters distracted me. So I spread them all out on the table, at the start. Another annoyance: all the pieces have exactly the same cut. More than once I had pieces fitted in the wrong spot. 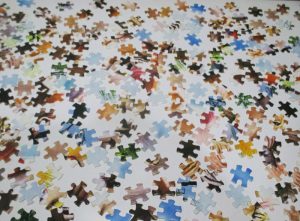 It has serious quality issues. When I first opened the box, I had to separate many many pieces that were still adhered together, and left tiny bits hanging. Also they’re very thin. More like a few layers of cardstock pressed together, than cardboard. I actually had to be careful to avoid brushing my sleeve across the puzzle in progress or pieces would all get pushed out of place, they fit so loosely. Sigh. 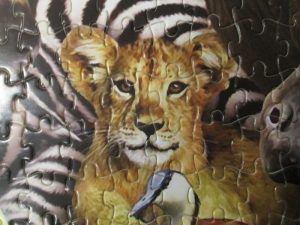 My husband looked over my shoulder: “Well, that’s very un-realistic,” he said and I know what he meant: cute young animals sitting together as if for a group photo. Either the original was a digital painting, or the printing slightly blurred. I find it charming in spite of that. I bought it secondhand, but will definitely avoid this type of puzzle in future. Even the box was cheap and flimsy- I reinforced it by gluing a layer of stiff paper inside, shouldn’t feel like I had to!

Assembly below. For several sittings at the beginning I had four top edge pieces in the wrong spot, which put everything out of alignment! But once I got used to handling it gently and keeping my sleeves folded up, I did enjoy putting this together, got into the “puzzle mode” and will probably be disappointed when in future it starts to fall apart or get damaged after several re-workings. (Already quite a few knobs were bent, layers of paper torn, and I had to glue over a dozen pieces that had layers peeling apart straight out of the box). It’s 1,000 pieces: