Tales from a life without technology 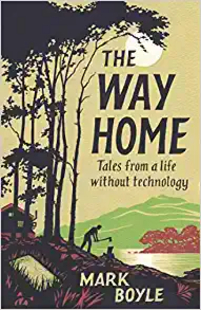 Near the end of this book, the author says “I decided that instead of spending my life making a living, I wanted to make living my life.” He left the city and job behind, built a cabin on a piece of land and committed himself to living without a phone, electricity, plumbing, etc. Doing all his work with hand tools. Living off the land, engaging in a bartering and gift economy with neighbors (though most of them had the usual conveniences). He deeply felt that this would make his life more purposeful, even though without internet or cell phone he soon lost contact with myriad people, remaining close only to those that lived nearby or stayed in touch via paper mail. I have to say I know what he means, feeling like doing things with your own hands and simple tools is more meaningful. I prefer an hour weeding in the garden or trimming shrubs to typing on a keyboard myself. I don’t know if I could go so far as to do without electricity and heating, though. It’s hard to eschew all the easy things most people take for granted, and live in a way that takes a different kind of work. Boyle doesn’t avoid admitting the difficulties, or things he has to do without. But he also waxes long on the rewards, which are of a different kind. Feeling tied into the seasons and close to the land. Paying more attention to the other living things around him- insects and plants. Learning skills that seem forgotten in this day and age.
His book doesn’t have a lot of day-to-day details (which I might have enjoyed) rather it’s a series of vignettes and noted thoughts on varied topics, as the mood took him to recount them. Sometimes he discusses how decisions were arrived at, where he came from, or how his thinking has shifted (he used to be vegan but now fishes and eats venison). Other parts of the book are little stories about things with his neighbors or specific pieces of the work he does around his land- planting trees, washing clothes by hand, cutting wood, building a hot tub (I wanted to see a picture of that!), foraging berries and greens, starting seeds, turning compost, making candles, etc. He also recounts a lot about visiting the Great Blasket Island, quoting from written works by the people who once lived there (in a very sustainable manner) and reflecting on why they eventually had to leave. I didn’t feel as immersed or connected to those parts of the book. Also some segments started to get repetitive near the end. He lives in Ireland, by the way. And now I’d like to read a previous book he wrote, The Moneyless Man.
I did notice, and appreciate, how old-fashioned this book itself feels as a physical object. It’s a clothbound hardback, without the slick plastic cover library books usually have. The paper is a nice muted off-white and has the texture of good recycled paper- or at least so I imagine. It felt like a book in hand I’d usually from a discard sale or found in a thrift shop, not a relatively new book produced just a few years ago! I’d like to think this was a conscious choice the author made in having his book printed- which seems very in harmony with his stated purpose and lifestyle.
Borrowed from the public library.
Rating: 4/5
266 pages, 2019

More opinions:
Books Please
So Many Books
Pages of Julia

PrevPreviousFox and I
NextChicken Soup for the Horse Lover’s SoulNext